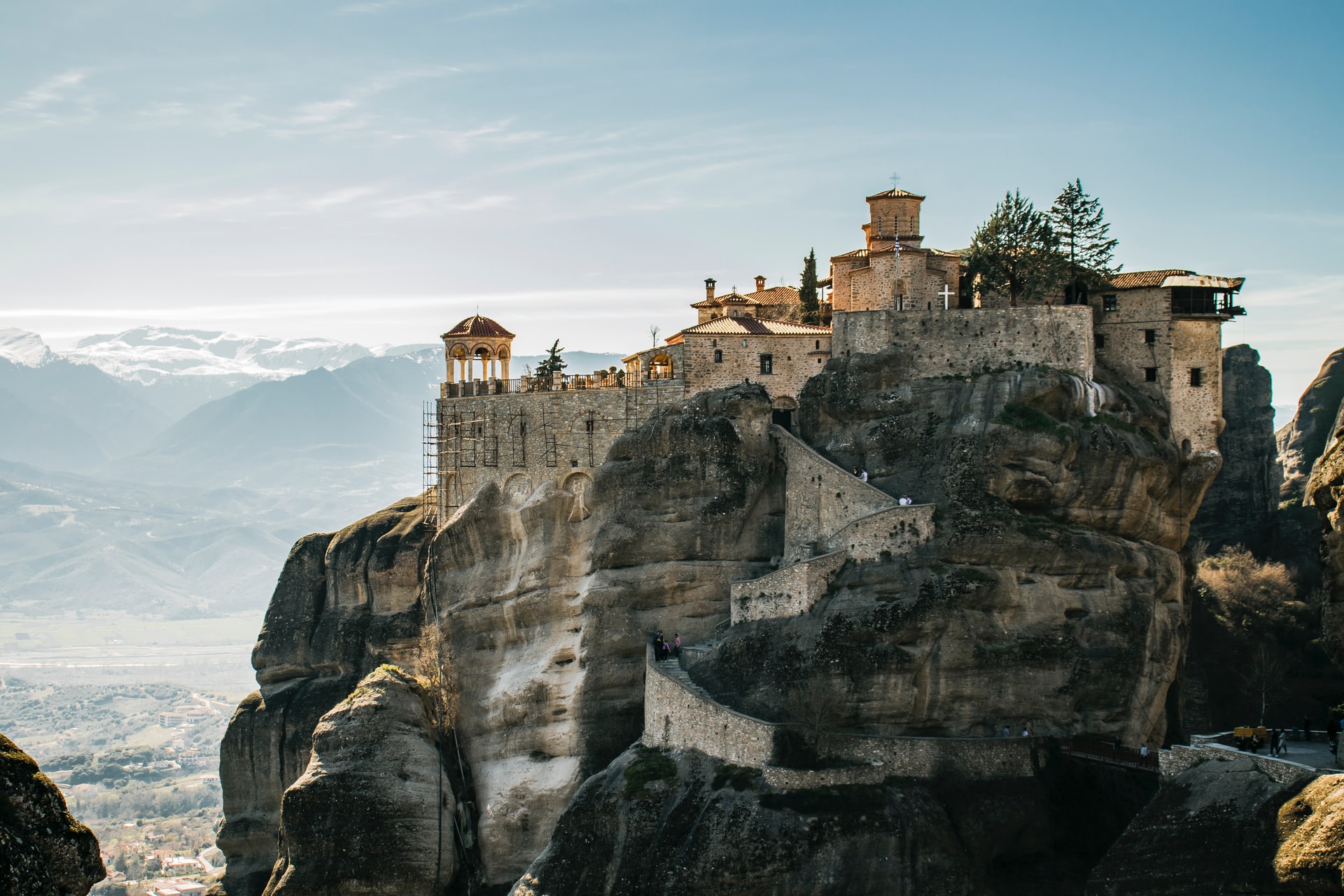 Get the chance to explore two of top ranked UNESCO-listed Classical sites.
Drive through the fertile plain of Beotia, crossing the towns of Thebes – connected with the tragedy of King Oedipus and arrive in Delphi Archaeological Site widely known in ancient times as the navel of the world, the “Omphalos”, whose prestige extended far beyond the boundaries of the Hellenic World. Pass by Castalia Spring, visit at the archaeological site and view the monument of the Argive Kings, the treasury of the Athenians, the Athenian Stoa, the Polygonal Wall, the monument of Platea and the Temple of Apollo famous for its oracle. Entrance to Delphi museum (own expenses), with spectacular exhibits including the frieze of the Treasury of the Sifnians, the Naxian Sphinx, the Statue of Antinoos, the famous bronze Charioteer, and many other artifacts. While there try to spot the well known ancient engravings on the stone such as ‘Know Thyself’ and ‘Nothing in Excess’, used in the Socrates philosophy works.
Spend some time at the traditional Arachova Village. Where you have the opportunity to wander around the picturesque stone houses, enjoy the colorful scenery of one of the most famous destinations in Greece… Next day will bring to to visit and admire the breathtaking views of the world significant Meteora Monasteries – one of the most famous man made wonders of the Medieval World.
Admire the clifftop Byzantine Monasteries built all the way back in the 14th century by the monks that still operate nowadays! Take a peek inside, meet and talk to the monks and discover priceless artifacts and wall paintings.

Get the chance to explore two of top ranked UNESCO-listed Classical sites. Drive through the fertile plain of Beotia, crossing the towns of Thebes – connected with the tragedy of King Oedipus and arrive in Delphi Archaeological Site widely known in ancient times as the navel of the world, the “Omphalos”.Tour the cliff-top monasteries to visit two different BYZANTINE MONASTERIES* built on top of rock towers and providing fantastic views over the plain. Meteora is included on the UNESCO world heritage monument list. A trip worth taking connecting two diffeent eras.

Day 1 – Pick up and depart from Athens
Pick up from your hotel and departURE for our 2-days tour in the Mainland Greece. After approximately 3 hours and after having a short stop on the way, we shall reach our first destination of today the small town with its Huge impact on World’s History, Delfi . Lying uphill of Mount Parnassos, within the angle formed by the twin rocks of the Phaedriades, the Pan-Hellenic sanctuary of Delphi, home of the most famous oracle of ancient Greece which defined all major historical events of ancient Greece. Delphi was referred as the centre of the world! it is here, that the two eagles sent out by Zeus from the two edges of the universe to find the navel of the world, finally met each other! Our professional guide will provide all necessary information during the Visit of the archaeological site, and, the Museum . The sanctuary of Delphi, set within a most spectacular landscape, was for many centuries the cultural and religious centre and symbol of unity for the Hellenic world. In the afternoon and after visiting picturesque mountain village of Arachova, we will drive through Central Greece crossing the Thessalian plain, to Kalambaka, a small town built on the foothill of the majestic grey rocks and crowded by the Meteora Monasteries. Overnight in Kalambaka.
Day 2 – Meteora Monasteries
After breakfast we shall depart for our very next destination on our tour. leaving behind the town of Kalambaka or recently renamed as Meteora, we meet with the breathtaking grey rocks. Upon arrival we shall visit Meteora and the 2 major monasteries. Breathtaking scenery perched on huge rocks which seem to be suspended in mid-air, stand ageless monasteries where you can see exquisite specimens of Byzantine art.. After our visiting the monasteries we will stop for lunch in an nearby traditional restaurant. Early in the afternoon we depart for our return to Athens 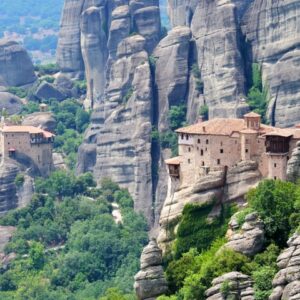 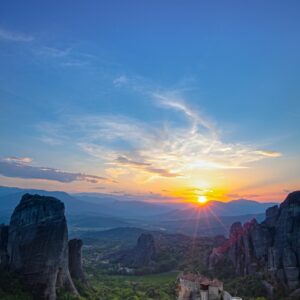 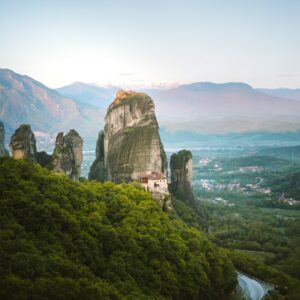